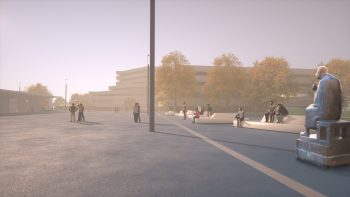 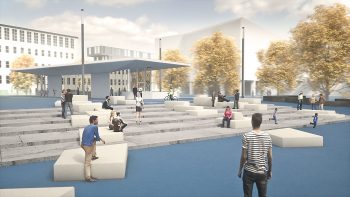 Clear and minimalist, a blue asphalt marks Albertus-Magnus-Platz, which connects the various entrances to the university buildings. In the centre, the oversized figure of a student walking across the square. Light grey islands stand out from the blue floor, inviting visitors to linger and communicate.

The entire area of the Albertus-Magnus-Platz is to be designed with blue asphalt.

This central square of the university is closely interwoven with the urban structure.

The coloured asphalt makes the area perceivable as a university site with its individual components: the entrées of central university complexes, the axes of movement, the students' meeting place as well as the monument of Albertus Magnus, who, as a universal scholar, is not only the eponym of the square's name, but rather its source of meaning.

Due to its many adjoining elements - such as the bridge railings, the roadway, cycle paths and various buildings - the square is very diverse.

The monochrome color supports the generosity of the new design of the Albertus-Magnus-Platz. It takes up the emptiness as an important principle of a square. Through emptiness he realises his potential to create a usable and experienceable space.

The strictly minimalist blue stands for the energy that connects celestial bodies drifting apart and for the resulting force field in which all components interact. It opens the perception for the networking of the university building.

At the same time, the perception is also awakened for cyclists in a shared space.

On the bridge a 7m high figure rises out of the blue asphalt, depicting a giant zoomed student approaching the main building with his bag under his arm.

Due to its size and position, the sculpture has a great radiance. Even from afar, the figure is recognized by the roaring traffic and linked to the university.

Walk Tall is the snapshot of an everyday scene at Albertus-Magnus-Platz. The sculpture represents the students who animate the square and the university. It focuses on the most important aspects of the university. Their students.

The sculpture is deliberately designed as a monochrome and abstract character that makes use of a polygonal aesthetic. With its blue surface, it connects the blue ground with the sky. On the multitude of polygonal surfaces, the blue unfolds a multi-faceted degree of shading in the light.

The head in the sky, the feet on earth.

Through the perspective distortion of the legs, the emphasis lies on the activity of movement, which takes up the central use of the square and releases a stronger potential for identification.

The sculpture of the young, oversized student enters into a richly contrasting interaction with the time-honoured, almost small Albertus Magnus.

The limits of blue asphalting

On both sides of the entrance area of the main building there is a wall. Its two ends are aligned with the north and south boundaries of the bridge and thus mark two important axes. The blue asphalt is covered along these lines. Further south of the bridge, the blue flooring surrounds the bicycle station, borders on Grümmer's listed floor design and runs up to the generous staircase. Below the steps, the blue asphalt surrounds the Entrée der Philosophikums. Its western boundary releases passers-by to the beginning of the Studentenweg. At the western border, the Blue Aphalt says goodbye to passers-by as soon as they enter the Studentenweg. To the south, the Blue Aphalt ends with the floor area between the seminar building and the lecture hall.

Albertus-Magnus-Platz is a place of movement, encounter and communication. There are groups of islands along the axes of movement of the university campus. The polygonal shape of the islands varies in height and form, they are arranged loosely and invite you to linger. The polygonal elements take up the dominant design character of the architecture/place.

They invite you to sit, lie down, talk, take a break, make telephone calls.

The furniture is made of light grey tartan rubber. The durable soft rubber coating has a pleasantly warm and cuddly feel. It is weatherproof and consists of recycled raw materials.